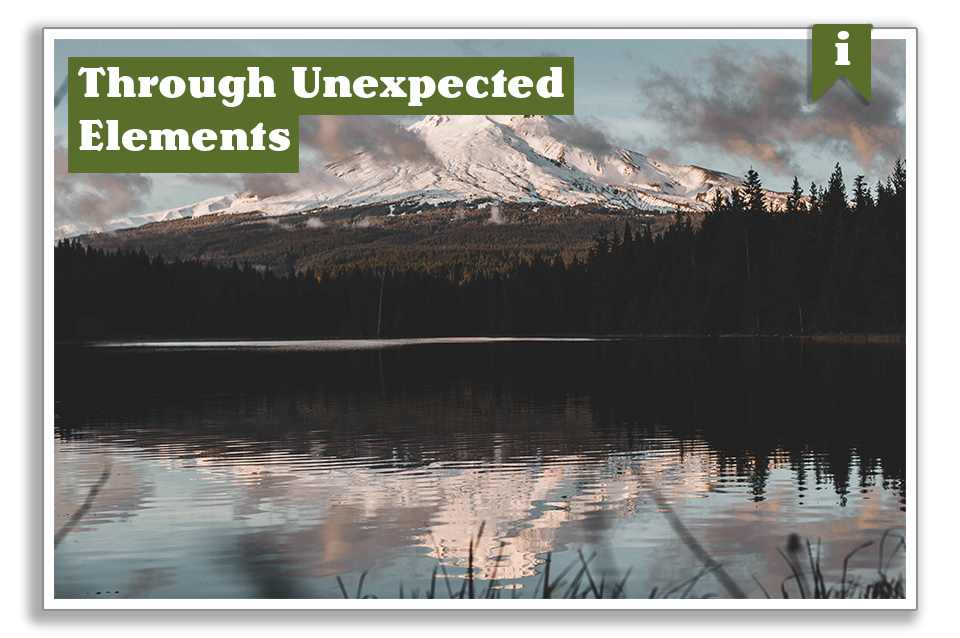 I stepped out of my car into the cold, dark air. Mt hood towered above me to the north, but she was still concealed by the black vail of the night sky. Three weeks earlier, I had guided myself into a snow storm there while navigating to a tucked away waterfall I had seen in the distance. The sights and storm that day were beautiful and powerful and made me fall in love with the mountain that I often viewed from afar but had never had the pleasure of running directly in her shadow. I knew the weather was going to be wild but I thought it had been my last chance to run up the white river basin before it transitioned into snowshoe season. But there I was, three weeks later with glowing stars above my head and a plan to go further than the weather would allow on my previous visit.

After my first few steps, I paused to absorb the view to the south, away from the mountain. Thick fog was rolling by, swift and unending, with the sunrise beginning to paint itself in the night sky above. I turned back, now able to see the mountain as the colors reached its massive grey and white walls, still backdropped by the night. A cap of streaked clouds moved across her summit. I knew this was going to be a memorable day in the hills.

I continued running alongside the basin on a service road that thins into single track in the first mile. The light of the sun continued to spill on to the scene and light the distant path before me. But then strong winds came as if provoked by the light of the day. It lifted the dry sand and dust from the ground and funneled it down through the basin into my face and through the trees on both sides of the river. I put on glasses to protect my eyes as best as I could, but hours later I would still be irritated by the persistent grains that found their way under my eye lids. Cruising through the trees alongside the basin, I felt slow against the challenging winds but excited by the unexpected elements.

Excitement turned to fear as a nearby tree let out a roaring snap and came swinging down to collide with the earth just 20 feet from me. I abruptly changed course and sprinted straight for the riverbed as I noticed the number of deadening trees being assaulted by the strong winds. Other trees fell but I made it the hundred yards to the river before they snapped. I was now out of the path of any falling trees, but would need to combat the large jagged rocks and soft sinking sand to maintain my forward progress. I also no longer had the trees to help calm the wind and the dust it carried.

I worked my way around a bend in the river basin and was greeted by another breath taking sight. The wind had carried in a wall of clouds that glowed bright orange as if attempting to conceal a fire behind its mass. I was in awe and inspired to push through the winds that didn’t seem to want me there.

The river basin eventually split into two draws and I ascended the finger between them just as the dust turned to freezing rain. It blew sideways and struck my face without mercy. The earth beneath my feet was now like a soft sand beach, wet on the surface but dry beneath, no longer rocky, but now speckled with patches of bright green. My face stung and my legs were beet red and numbing. I noticed that the ridge was thinning further up, and I feared that once I got there, it would not be passable in such forceful, and at times blinding, weather. In order to reach my turnaround at Timberline Lodge, I knew that I would need to run back down to the basin floor and climb the next ridge over.

The fast trip down was an exciting reward for my short, challenging ascent. I was finally moving downhill with the wind and rain against my back, and the soft sand now absorbing the impact beneath my feet. Upon reaching the floor of the basin, I entered the tree line to the West where I would get on the Pacific Crest Trail to complete my run to the lodge. Miles later, through the persistent weather, I reached my turnaround, aching and cold, but completely in awe of how fortunate I was to experience such a day.

I stretched and got warm for a few minutes under a sheltered area, attracting strange looks from the warm and comfortable passers-by. I probably looked like a mangy dog licking its wounds before heading back into the wet, grey world. I stepped back outside just as the rain turned into snow, the flakes small but many. My descent was fast with the slope and wind in my favor. For the first couple miles of descent, my right quad ached and cramped–an issue I have been struggling with the last few weeks. I would have to spend some extra time with the unforgiving foam roller that night.

In the last mile, I passed a runner just beginning his journey. I wanted to stop and tell him all he had missed that morning, but I knew he would find adventures of his own. The day was brutal at times, but the unexpected can always turn an ordinary run into an extraordinary adventure.